However, those who choose, for example, the circuit of parks in northern Tanzania, are sure to see their amazement growing. The adventure begins 120 km and so a three hour drive north of Arusha (where we land at Kilimanjaro Airport), with the discovery of Lake Maniara National Park, home to countless pink flamingos in winter. “These are pink because they eat shrimp and seaweed, which are rich in this salt lake,” assures the Swedes, who drive us 4 × 4. “Here, the nickname of the area is Mto Wa Mbu, meaning Mosquito Village. It is used in swamps too. But, with global warming, the swamps have disappeared, “explains the Swedish. Like many other guides, this Tanzanian guide trained at the school for two years and then studied French at Alliance Franকেaise. As a mountain guide, the highest peak in Africa is 5800 m. Kilimanjaro is covered with perpetual snow – they have made it famous all over the world. Alas, the Swedes lament, In, there will be nothing left. “ 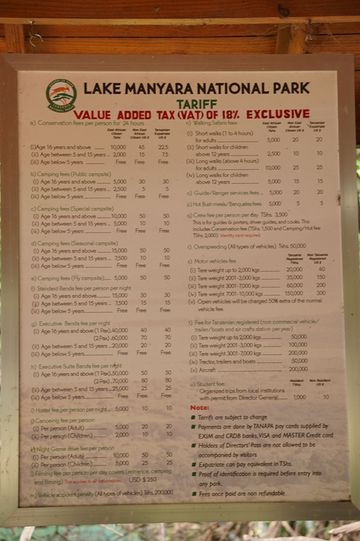 From now on, Swedes with tourists who come for photo safaris. The man is smiling, immortal, rarely lacking in explanation. And also a good driver, which is invaluable, due to the inconvenience of some of the roads we travel in during the week. Discovery of Lake Maniara Park (330 km2 of which 2/3 is occupied by lakes) begins with a stop at a checkpoint. For “papers”. In other words, pay the entry fee (higher) and get permission to safari.

Then, we are offered a luxurious jungle where hundreds of baboons roam the low side of the road and in the jungle, also populated by gray monkeys and vervet monkeys. The former deserves the nickname of their “red ass” monkey. They laugh, laugh, play with their little ones that mothers carry on their backs, all of a sudden no one guesses, they reappear …

More discreet, quiet, gray monkeys climb trees, spit on twigs, look at you, eat, hover over tall twigs and much more … This is the first day, everything surprises us: monkeys, of course, but also acacias, giant ficus, Palm trees – in fact, a local variety of coconut palm -, wild mango tree, sycamore …

Then the plains covered with yellow grass are still divided by some very green acacia: there live buffalo, zebra, wildbist or giraffe. “In Savannah, the wildbeast and the zebra still live side by side, in symbiosis,” says the Swedish. They work together to identify predators: zebras have very keen eyesight, and have a very good sense of smell.

Further, a small belt of acacia trees acts as a shelter for elephants and lions, which sometimes take refuge in tree branches. On that day, we do not see one of the famous lions of Manara, so it is often photographed, placed on the trunk of a branch. Elephants, on the other hand, are strong, eating, with their trunks, the leaves of many shrubs.

Now it’s lunch time. We left our lodge (nature hotel) with lunch box. Stop at a picnic area with toilet. We sit at a table under a tall tree and enjoy a samosa, a vegetable sandwich and a chicken skewer. Life is beautiful … The weavers are moving, the nest they have built in the tree above our heads. Around us, countless gorgeous spruces, with glittering dark blue feathers, await us to tear to pieces.

It is warm and a sleep would be welcome. But it’s time to leave. Back to the forest in Savannah. There, in the middle of two branches of an acacia tree, for the first time that day an arrogant head, a huge neck with uneven dark brown spots, small little hairy horns: this is a giraffe. And she is a woman, as evidenced by the small pieces of hair above her small horns. He looks at us, then, gloriously, turns his face towards us, disappears behind the acacias before reappearing, and crosses the road in front of us, towards one of the many rivers that cross Manyara Park. Surprise! This giraffe is not alone. Two small giraffes (good, small, everything relative) follow him. Also mottled with cream and brown, but less dark. Each with slightly different patterns. They stop, look at the 4×4 and then start running, their high legs, their tails in the air… then the three herbivores stop and look at us again. An oxpacker then settles on the mother’s back. “The oxpeckers release the giraffe from their parasite. They warn him even if the hunter, for example, approaches a lion,” says the Swede, who must not miss anything. He adds: Lives.

Symbiosis may occur, but lions still hunt giraffes, don’t they? According to the Swedes, it is mainly the lions that attack them. Since they weigh only 200 kilograms, they can run fast. “The lion is heavy, about 250 kilos, his man annoys him and prevents him from hiding,” she says.

Very close to the place where the giraffe meets, there is a river, which at some point loses itself in a kind of swamp. Its surface is covered with bright green vegetation, which the Swedes call “salad”.

The park is home to some 400 species of birds, including waders, lapwings and geese.

However, the most spectacular is the water hyacinth. A small bridge tied with one hand of water lets you see clearly, strong, inexperienced and yet agile, fast, disappears underwater, comes out an ear, then an eye, then a huge jaw …

In the meantime, the day has slipped through our fingers! Now the sun is setting. It was time to return to our lodge (hotel in nature) for the night. We take the track again, the landscape changes very quickly, is dry. Sheep and cattle herds kept by semi-nomadic shepherds in the plains multiply. Nearby, but rather early round huts where they live. “They are Masai,” says the Swedish It is, of course, the most famous East African nation in the world. Yet the Masai are only one of Tanzania’s 120 ethnic groups, and they make up only 2% of the total population. But, it is true, they are very present in the north of the country.

We are finally in our lodge: sturdy huts, covered with straw and furnished with all modern comforts. Welcome to the shower. The swimming pool near the dining room will be later. All of this is incredibly luxurious if one thinks that we have seen Masai’s living conditions before … it inevitably raises questions. Should you feel guilty? The Tanzanian government, despite its seemingly committed commitment to wildlife conservation (occupying more than 25% of national parks and other protected areas), strongly encourages tourism and especially these safaris. With over 800,000 annual visitors, the activity directly or indirectly supports many residents – the Masai community, like others, benefits from it – and now represents the country’s second source of foreign exchange after agriculture. As an entry fee to national parks, these are used to finance animal protection.