The new survey, conducted by Ipsos for EVBox among 4,000 potential or proven electric vehicle drivers in France, Germany, the Netherlands and the United Kingdom, is a comparative reflection of the survey conducted in 2020. Two years later, mill and development have been noticed.

Responding to a request from our member Evibox, Ipsos asked 5 questions: Who are the current and potential drivers of electric vehicles? What are the environmental considerations that drive their potential or proven users? What are the barriers that prevent people from enjoying electromobility? What is the current state of fast charging in Europe? What is the evolution of these 4 points in 2 years after the first study in 2020 which later included Belgium and Norway?

The Ipsos Institute has already noticed that the profile of electromobilists has changed. Electric cars are more or less reserved for pioneers and enthusiasts of new technologies. Drivers are increasingly close to the general public.

For this, manufacturers and other related companies need to adapt their communication with individuals and professionals. But also to expand the ways to recharge outside the home. Such as at work. But also in the case of high power chargers.

A sharp increase in electromobilists in 2 years 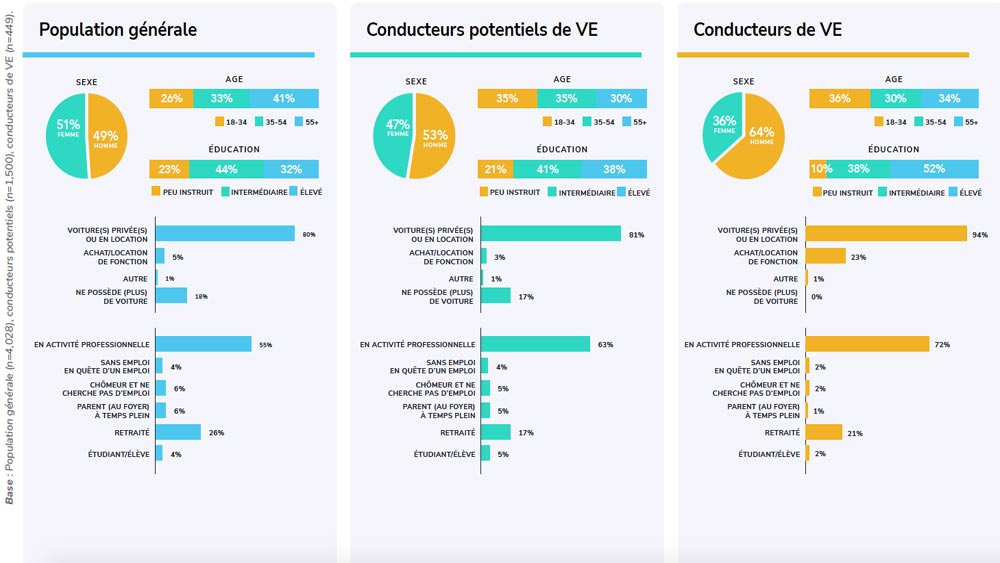 Potential EV users tend to be more focused on the middle bracket (35%), with a better female / male distribution (47 vs. 53%) and a lower elite level of education. For example, the “poorly educated” bracket has risen from 10 to 21%. They are more easily celibate.

The share of active electromobilists is slowly being pushed away by unemployed people, home parents and students. So what falls from 72 to 63%. In case of female / male distribution, far better students from France Netherlands (26/74) (40/60) in case of proven EV driver.

Overall, current (72%) and potential (77%) drivers of electric vehicles are more concerned about global warming than the general population (64%). This is even more evident in France: 82% of current electromobilists make up 78%, for 70% of the population.

However, this good conscience seems to be less than in 2020. Among regular EV users it is 77 to 72% overall, in France 83 to 82% and very significantly in the UK (88 to 69%). This shows that future electromobilists still expect governments to adopt policies centered on the environment as well as tax credits. However, these requirements have been somewhat broken in 2 years, no doubt due to the health crisis that has changed the cards a bit. 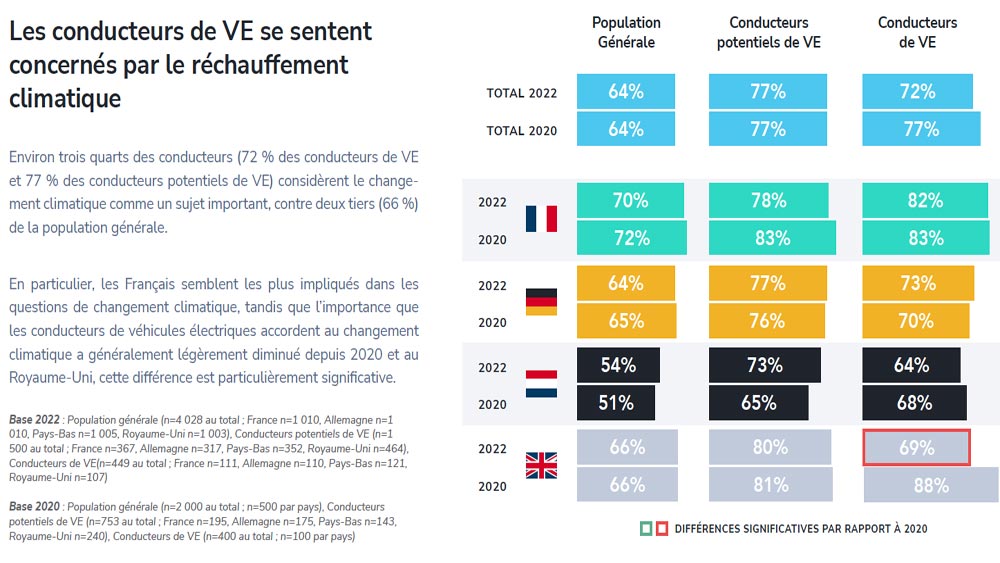 Motorists who are connected (64%) or ready to be (67%) believe that companies that provide electric mobility should benefit from tax benefits. This is much higher than the level found in the general population (48%). All of this results in reduced CO2 emissions that will bring electrical mobility. This is an important factor in the decision to buy a new passenger car: up to 83% of proven electromobilists in Germany.

Positively taken away by the Germans, certain electromobilists demonstrate a fairly good knowledge of the Green Deal. But their share is shrinking in contrast to potential EV users and the general public. In Germany, again, current and future connected drivers believe the majority (69% as against 28%) will abandon petrol and diesel vehicles by 2030. The French are much more skeptical (60%) if they already run an EV. Future users show more confidence in this. 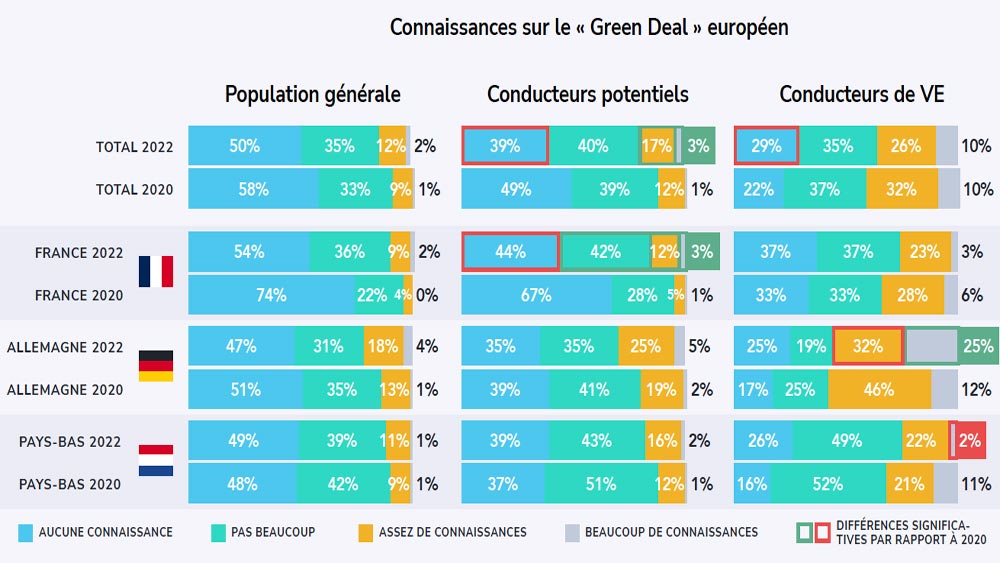 Among the general public, 56% already believe that the charging network will improve. This position is more marked among EV users (72%) and those who are ready to be one (75%). Of the latter, it is the French who are the most faithful (78%). Intelligent charging, which makes it possible to better integrate the development of EVs in electrical networks, is very popular among electromobilists (70-72%).

Slightly less (66-71%) believe that fossil fuel incentives should be reduced or eliminated. However, French EV users are the least open to this idea, with one share falling to 59%.

EV and the world of work

More potential and current electromobilists have or want an electric company car. The stock rose 31 to 73% in the first and 56 to 71% in the following The British claim the most: 75 and 83%. This is a point that can make an employer a little more attractive (about 60%) from an employee’s point of view. The Dutch, however, think the opposite.

Interestingly, only 70% of electromobilists think that the employer should cover the cost of charging a company’s EV. If this support is preferred with home-installed equipment, the share falls to 60%.

Overall, more than 80% of connected drivers want companies to provide terminals for their customers. The proportion among German electromobilists reached 86% or 3 points above the French.

Barriers to the establishment of electrical mobility

This has been a constant over the years, with barriers to the adoption of electric vehicles mainly vehicle prices (60% on European panels, 53% for French), recharge potential (43% overall, 41%) in France, but 52% in Germany) and refueling time. (Overall 42%, 44% in France and 51% in Germany).

About 80% of electric vehicle users will choose an EV again during their next investment in a private car. A stock that has declined 4 points in 2 years. The French are a little more reluctant (74%) than where they were most confident (85%) 2 years ago. 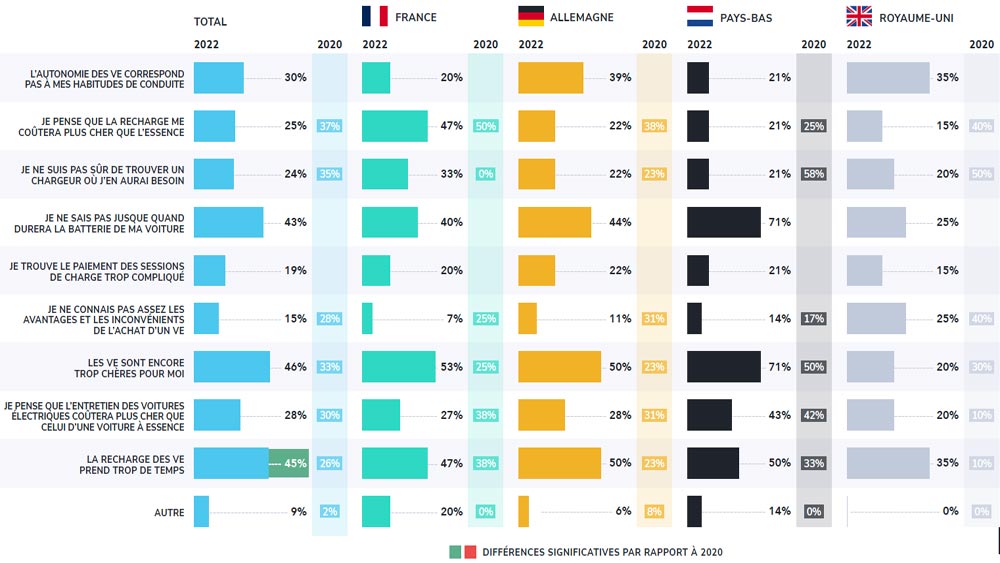 However, new sections have been added to the survey that may explain the partial extinction. Thus supermarkets, restaurants, fast food, hotels and sports facilities which occupied 26, 16, 10, 9 and 5% votes respectively. Charging in public and commercial parking spaces has increased from 24 to 31%.

4 out of 10 EV drivers do not feel any discomfort while charging. This point is in sharp decline: 88 to 41% overall and 97 to 39% in France where 2 reasons are equally given (33%): the terminals are out of order and the stations are already occupied. Then comes the problem of rejecting the recharge badge (17%). This translates into a greater concern for long-distance travel in EV

” Positive feedback on charging infrastructure for electric vehicles has declined in almost all countries since 2020, except for German drivers. “, Highlights Ipsos. This is only 27% in France, up from 36% 2 years ago. About two-thirds of EV drivers use fast charging at least once a month. However, 1 in 3 electromobilists never take advantage of this possibility. In addition, use fast charging “. Overall has declined sharply since 2020 “It simply came to our notice then.

It is at service stations that high-power chargers are used the most overall (61%). But not France (41%), where shopping centers and department stores (50%) and supermarkets (44%) are ahead. Connected motorists expect the development of charging at all of these sites and others where they are accustomed to parking their EVs, only during a race or trip. Even if it means paying more for the power supply.